Since ancient times, the Japanese have actively accepted and introduced the cuisines of other countries, and have endeavored to refine them to suit the Japanese palate.

In the Heian Period (794 - 1185), Daikyo Ryori, which was introduced as a sort of court cuisine from China and Korean peninsula, became firmly established as the most formal banquet style for entertaining important guests in the Heian Court.
Further, in the Kamakura Period (1185 - 1333), thanks to the efforts of Buddhist monks who traveled to China to study, tea-drinking custom spread throughout Japan and Shojin Ryori, a form of vegetarian cuisine derived from the dietary restrictions of Buddhist monks, emerged and evolved in Buddhist temples. In this way, the earnest determination of our ancestors to learn about foreign culinary cultures has always been present in the shadows of the development of Japanese cuisine.

In the Muromachi (1336-1573) and Azuchi-Momoyama (1573-1603) Periods, with the arrival in Japan of Nanban-jin (Western Europeans), the Japanese encountered European cuisine for the first time. This included such foods as castella, a type of sponge cake originating in Portugal, bolo, a small round cookie also from Portugal, and tempura.

In the early Edo Period (1603-1868), when Japan entered a period of national isolation, the only connection with Western countries was through the Dutch trading post of Dejima in Nagasaki. Even so, the Japanese, in their intense curiosity, were very flexible in accepting the cuisine of the Dutch and Chinese who were permitted to live there, and enjoyed tasting foreign food culture by adapting them with Japanese ingredients and seasonings.

When Japan was finally opened to the rest of the world, it set about building a modern nation, seeking the model in the western lifestyles and ideas. Additionally, as exchanges with Westerners deepened, the number of western restaurants also increased.
Western seasonings and ingredients gradually permeated general society, and the trend of enjoying yoshoku, which is a distinctive cuisine arranged to suit the Japanese palate, became more and more prevalent.

What are the stories behind the birth of this yoshoku that many of us today feel so nostalgic about?
In this special feature, focusing on the period from the Edo Period to the Meiji (1868 – 1912) and Taisho (1912-1926) Periods, we will trace the history of our predecessors who boldly took on the challenge of accepting foreign cuisine cultures while repeating trial and error.

Throughout the early modern period, many missionaries and merchants came to the Kyushu region from Europe.
Some of these new arrivals wanted to live in Japan and, as a natural progression, European cuisine, such as bread, meat dishes, paella, and tempura were introduced to the region from a relatively early stage.

After Japan was closed off to the rest of the world in the Edo Period, Nagasaki, the only city that the Dutch, Chinese, Koreans, and Ryukyuans were permitted to enter Japan, became a center for cultural exchange.
Historical documents from this time record the development of the Chinese styled cuisine known as Shippoku Ryori. Shippoku Ryori, which is still famous as Nagasaki’s local cuisine, was loved as a local restaurant cuisine, not only by foreigners who came to Japan, but also by Japanese scholars of Dutch learning.

A dining scene in Dejima(Nagasaki Museum of History and Culture)

A dining scene in Dejima
(Nagasaki Museum of History and Culture)

In the mid-Edo Period and beyond, this culinary style gradually spread to Japan’s urban areas, including Kyoto and Osaka. While the tableware and utensils were in the Chinese style, the ingredients and cooking were in the Japanese style or the blend of Japanese and Chinese styles. This style of enjoying exotic cultures through food was particularly popular among the cultural elite, and such dining scenes were also depicted in cookbooks of the Edo Period.

Shippoku Ryori has been passed down to the present day, and such restaurants as Nagasaki’s 370-year-old Kagetsu and about-200-years-old Ryotei Ichiriki still have served the flavors of those times even to this day. 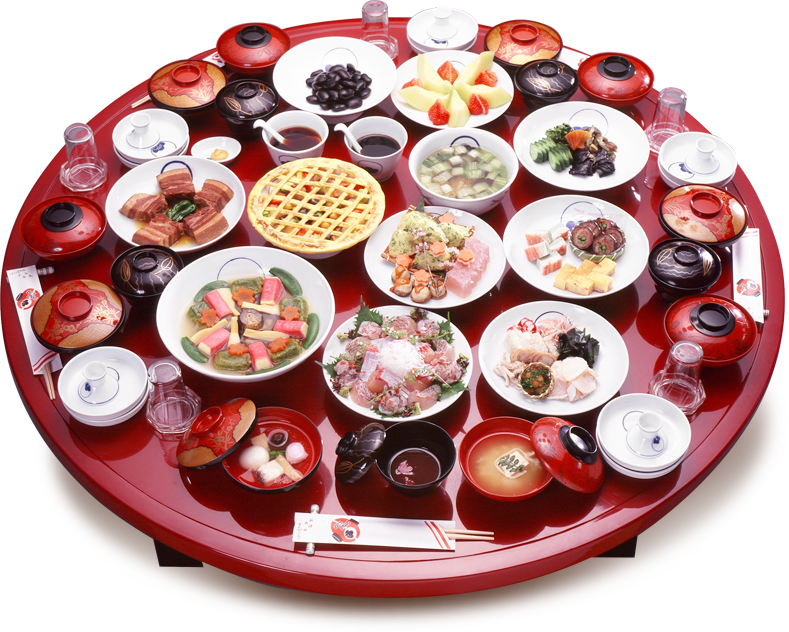 Shippoku Ryori refers to a culinary style in which dishes served on large platters in the center of a communal table (in the late Edo Period, round tables started to appear more often) to be shared by people sitting around the table. One of the two Chinese characters in the word Shippoku means “table,” while the other, more unusual character, is said to mean “tablecloth.” It is believed that the unusual pronunciation of this combination of characters, Shippoku, derives from a word in a Southeast Asian language, possibly Vietnamese. There are historical records that call the table on which Shippoku Ryori is placed as a “Shippoku-dai,” a word that is considered to be the origin of the word “Chabu-dai” that has been used since the early modern period.

At any rate, this style must have been revolutionary to Japanese people of the time. Generally the traditional dining style in Japan was typical to put individual legged trays in front of each diner, because of the relic of samurai society, in which social ranking was a major concern.

However, the appeal of Shippoku Ryori was that large numbers of people could gather around one table and have an enjoyable meal without those barriers of social status. Records of Shippoku Ryori have not only been found in Nagasaki and the Kyoto-Osaka region; they have also been written here and there in diaries and other records from more regional cities. In other words, this was loved as urban culture for experiencing exoticism.

Its original form is said to have been modeled on the Portuguese confection, PAO de lo.
The appeal of Japan’s castella, however, is its soft texture.
Modified many times over the years, it eventually took on the form of today’s soft, fluffy castella. Additionally in some books published in the Edo Period, we can confirm that the recipes of castella was already written.

There is a historical document that the Christian missionary, Luís Fróis, presented Nobunaga Oda with a bottle of konpeito.
And some missionaries of the time apparently distributed konpeito as a kind of throat lozenge.
These small, cute ingots of sweetness would certainly have melted the hearts of the locals in those days.

Sugar first came to Japan in the Nara Period(710-794). It is believed to have been brought to Japan from China by Jianzhen (688-763), or Ganjin in Japanese, a Chinese monk who helped to propagate Buddhism in Japan. However, at the time, it had strong overtones as a medicinal food for the nobility, and it was not something that could easily be tasted by the common folk. Even later, sugar was still highly prized as an expensive item, and it still did not find an established place on the tables of ordinary people.

In the 16th century, in the course of trade with the Western Europeans, European confections made with sugar and eggs (castella, bolo, konpeito, aruheito, etc.) were introduced to Nagasaki. Even so, these sweet European confections were still luxury items. It took many more years for them to permeate as the diets of ordinary people.

Associate Professor, Faculty of Food Culture, Baika Women’s University.
Born in Ishikawa Prefecture. Specialization: Comparative Food Culture Theory.
A lover of cookbooks of all types since childhood. As a university student, she gained experience working part-time on the production of cooking magazines and television programs, and became captivated by the profound depths of the study of food culture.
Lately, her hobbies include exploring cookbook stores overseas and collecting chopstick rests.
Major publications include Kindai Ryorisho no Sekai [The World of Modern Cookbooks] (co-author), Nihon no Shokubunka-shi Nenpyo [Chronology of the History of Japanese Cuisine] (co-editor), Japanese Foodways Past and Present (co-author), and [Ryorisho to Kindai Nihon no Shokubunka] (Cookbooks and the Food Culture of Modern Japan).