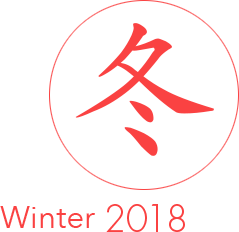 This recipe uses a kind of simple chicken dumpling known as gan. Add lotus root to the minced chicken to give a little accent to the texture of the dumplings. The flavor of the kombu dashi and the chicken blend together in the soup, bringing out the sweetness of the turnip.

*If the seaweed has been preserved in salt, wash off the salt, soak the seaweed in water, then cut it into easy-to-eat pieces.

Pond smelt (wakasagi) are at their best during the cold season, so we used them to prepare a crispy kara-age deep-fried dish. Enjoy them whole with curry salt and sansho (Japanese pepper) salt.

This is rice mixed with suguki, a variety of pickle that is closely associated with Kyoto. Pickled in salt, the suguki is allowed to ferment and mature in a special room called a muro*, and once it’s ready, it is shipped out to herald the arrival of the winter season.
Suguki has a gentle blend of sour and umami flavors, making the rice taste even better.

*Muro: A hot room kept at approximately 40 degrees Celsius (104 degrees Fahrenheit). This allows the lactic acid bacteria to carry out the fermentation process, bringing out the flavor unique to suguki.

orn as the eldest daughter of the grand master of Mushanokoji-senke, one of the three main schools of Japanese tea ceremony. Goto studied ceramics as an art history major at Doshisha University. Her dishes, based on kaiseki-ryori which she received training from her mother, a leading pioneer of chakaiseki-ryori (a traditional meal served to guests before a tea ceremony), incorporates different ingredients and cooking styles she encountered from her frequent visits abroad. Her dishes, arranged for the contemporary household, embody the culinary culture and soul of Japan.
—Vice President to Washoku Japan.

Japan during the Edo period was a feudal society, where rice was used as the index for the economy. Approximately 80% of the population of Japan at the time is said to have lived in rural areas that carried out rice-growing. In the context of this rural life, people prayed for bumper crops and gave thanks for the harvest, and as such, numerous festivals and events took place throughout the year.

Many Japanese annual festivals and events resulted from rice-growing culture, but even in modern society, customs to welcome the New Year as a family still carry the broader point of gratitude to one’s ancestors and hopes and prayers for the future.

Osechi ryōri is a celebratory selection of food which is offered to Toshigami and used to wish for good fortune in the coming year. The word formerly referred to food that was offered at seasonal festival days (the turning points of seasons), but eventually it came to refer to food for the New Year period specifically. The idea behind osechi ryōri is to represent multilayered happiness, and as a result, the Japanese pack various colorful and auspicious foods into special tiered boxes called jūbako. Of these, there are three major festive dishes that are essential to osechi ryōri. The regions of Japan have characteristic differences in which dishes are included: in the Kanto area of eastern Japan, the three dishes are kazunoko (herring roe), tazukuri (dried fish cooked in soy sauce), and kuro-mame (black soybeans), while Kyoto and other places in the Kansai area of western Japan use tataki-gobō (tenderized burdock with sesame dressing) instead of kuro-mame.

These names, incidentally, include some double meanings: for example, tazukuri literally means “rice-paddy maker.” These traditional foods have significant meanings for local regions and society. By learning about one’s ancestors in this way, perhaps one can enjoy deeper communication with one’s family today.

Tazukuri refers to dried fish (gomame, or small Japanese anchovies) cooked in a sweet soy sauce, and this is one of the dishes included in osechi ryōri to wish for abundance. As mentioned above, tazukuri means “rice-paddy maker”—this came from a custom in the past of using small fish as fertilizer for fields and paddies. Tazukuri is one of the three major festive dishes in both the Kanto and Kansai regions of Japan.